﻿Food+DrinksConcertsFootballContactAbout us
live Lokal...
news...
ON THE MENU
Lunch served from December 14th to December 18th
R.E.S.P.E.C.T.
Our own house publication, providing an interesting look into what's what on our island and beyond...
Lokal LOV.
A special column giving a high-five to worthwhile articles and opinions all through the year...
Sihl water level
ROW YOUR BOAT... 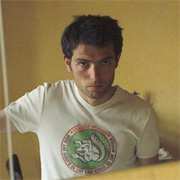 myspace
To reserve him the title Universal Genius may not be too far off, considering this guy's wide palette: from sonic creations and text sampling collages to photography and illustration, our man's a true renaissance man. He's Tom Huber, a 30 year old Zuercher and to just simply call him creative may not do his talents justice. As our Albert Kuhn wrote: «Tom, a blessed eccentric and solo traveler, an extremely creative individual of the kind usually only to be found in the farthest, godforsaken corners of the U.S.A.» (huh? They're everywhere, Albi!) That said, it's with those types, he's got his car parked in the same garage.
His hypnotically slow sound creations featured on «Playing with the Goats» also accentuate themselves in style with leanings towards sentimental rock or country.
Wordcombo oddities like «I'm happy to stay - not one more day» are plentiful.
And Rolf Zellweger (are there are more reviewers in ZH than musicians?) also writes: «He hates trends and cliches; his soundworld revolves around contradictions and seeming oppositions. Because of that, you can't really categorise this album, (unless you'd like to try, be our guest): Country, folk, metal, industrial, psychodelic all are here in happy unison, a perplexing symbiosis resulting in misteriously sounding, floating sonic constructions. Somewhere in between Beck, Fantomas and Mr. Bungle, but somewhat softer, slower. Could it be the soundtrack for a surfer movie or an existentiallly loaded road movie or.... you're gettin the drift.
«Playing with Goats» stands stubbornly alone in the musical landscape and defies easy consumption. Over a span of two years, he recorded all the instruments featured on it, gifting us with detailed, complex songs of a playful charm.»
Here's Tom, about his images:
«Actually, my fotos are about juxtaposing of what are real occurences during my frequent walks and what are mind creations, one infusing the other. The idea is to give a totally believable face to to the created images while adding another facet to the already existing real ones.
I aim to confront with a grotesque reality, while telling a hidden and not so obvious story, that way confronting and engaging the viewer. Generally, I like to leave the world to its absurdity and find a sense of humor indispensable.»
His second album «Walk through Elko» contains 11 songs, all typically created in his very own concise and precise sound. Great melodies, leading us to a spot where he wants us to be: Inside his mind, a place perhaps not drenched in sunshine but rather a continous loop of fall and winter. That's where he's at home with his creations, and you're invited to see him there. In ever so slightly disturbing territory and where it's possible to see beauty by looking into the abyss.
All the while scripting a film about a melancholic Gauloise man, herding his goats down from the steep, rainy hills and foggy meadows down into downtown Notopia...
For sure, he'll get your goat on the 26th. (Sorry for the cliche, Tom).
Back to Hall of Fame