﻿Food+DrinksConcertsFootballContactAbout us
live Lokal...
news...
ON THE MENU
Lunch served from December 14th to December 18th
R.E.S.P.E.C.T.
Our own house publication, providing an interesting look into what's what on our island and beyond...
Lokal LOV.
A special column giving a high-five to worthwhile articles and opinions all through the year...
Sihl water level
A hauntingly beautiful presentation of a fairytale

anchorandhope.com
Saturday, 17.11.2012, 20:20
oh what a night...
Dirty Three (AUS)
Mates, six years after the jewel «Cinder» by this otherworldly Aussie outfit glistened on international charts, the went on back home to the nurturing mothership and came up with another stellar and intergalactic masterpiece, the instrumental «Toward The Low Sun».
The band is Warren Ellis who lives in Paris and has toured with the Bad Seeds and Grinderman, when not working with Nick Cave on wonderful soundtracks for flicks like «The Assassination Of Jesse James by The Coward Robert Ford», «The Proposition» and «The Road». Then we also have Jim White who's based in Brooklyn but is rarely there due to studio work and tours with Cat Power, Bonnie Prince Billie, Nina Nastasia, PJ Harvey and Bill Callahan. Making it a trio is Mike Turner of Melbourne and he's connected with band brother Jim to Tren Brothers and several of their albums.
Dirty Three unmistakably proves that it isn't necessarily a bombastic word- and decibels-exploding type of show that wins the night, rather, like with «Toward The Low Sun», it can be a hauntingly beautiful, instrumentally weighted presentation of a fairytale. We imagine it conjures up creatures from fabulous fables, like firespewing dragons fed on nukewaste and irresistibly beautiful, curvaceous Miss Universe chicas. Hardcore reality is left in the dust not just for it's lack of truth but because it simply isn't pretty enough. In these sonic tales, horrific battles also erupt to help good win over evil, blood gushes in torrents and after battle you'll be seen riding towards the low redpurple sun before it changes into the silvery, blue moon. Slowing you down and inviting you to think what was, is and will be.
Dirty Three's music is astonishing in its wonderment, imagination and melodic intensity and it is born from the back and forth between their instruments which bring spheric sounds and infectious magical moods closer to you.
Well then mates, get out from under what's over you and step out. There's a new wind blowing in from Down Under. And it'll blow you far away. 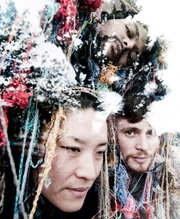 Kookie name for a band if you ask anybody but it ought to wet your appetite for a truly unusual band. You won't be disappointed: Zun Zun means very, very fast and Egui is for very, very gaga. And if you notice an Asian tinge that's cool but they're also quite British, like in synonymous for world-renowned eccentric antics. And since both locations are clearly located apart on our globe, world music is their stylistic home and our Fab 4 from Bristol will take you on their wild, breathtaking ride and zooming with you all over the globe with Afrobeat, Jazz and Freeformrock that's very, very free. It's an intoxicating mix of neurosis metalicus, off-beat Brit humor and a furious fireworks display of the unrestrained joy of playing music, promising to turn you into an addict and trance you out.
Kushal Gaya (guitar and vocals) and Yoshino Shigihara (keyboard, vocals, artworks) first got into each others face during a merciless improvisation battle. Later, they were joined by the hip by Matthew Jones on drums and Luke Mosse on bass. News about them travelled almost as speedy in the U.K. underground as their genius in coming up with an abundance of new sounds. It hit the scribes and fans alike and right in the hip, gut, ticker and noodle at that, meantime, their stage presence was crushing dancing hearts like Chinese fortune cookies. All that ballyhoo led to invitations to tour with The Ex and Sun Araw. Their long play first «Katang» (2011) is a cocky mix of rotten Red Hot Chili Peppers, Scatman John, Smashing Pumpkins, The Clash, Audioslave, Shangri-La, Sepultura, Fugazi, Talking Heads, Mars Volta, Feli Kuti and Panteon Rococo.
Just come and hear for yourself and see what you get from it. And if name calling isn't your cup of Darjeeling tea, all of it can be put more simply: It'll be wailing, rapid-fire guitar, loaded funkheavy bass, doom doom kick-ass drums, multilingual vocals and very, very infectious humor. All wrapped up in songs that are either too beautiful to be so short and others that never end.

An eclectic, vibrant and dynamic debut album that echoes the sound of a multi-cultural Britain in the 21st Century. – The Liminal