﻿Food+DrinksConcertsFootballContactAbout us
our passion...
news...
ON THE MENU
Lunch served from November 22nd to November 26th
R.E.S.P.E.C.T.
Our own house publication, providing an interesting look into what's what on our island and beyond...
Lokal LOV.
A special column giving a high-five to worthwhile articles and opinions all through the year...
Sihl water level

We're not a club; we don't have rules and regulations. We don't have members or a fixed structure, in fact, ours is as flat as our football pitch.

We're a group of football aficionados who've achieved other means of income in our individual lives than beeing paid to do what we love.

When we talk to each other, it's not like «You know, let's analyse, you know in the first half…» But NZZ's Richard Reich's Tuesday Football Column is requiered reading.

Zurich United includes four teams: Zurich United Grrrls, Zurich United Youngsters, and for the older chaps in the Honour League, we have Zurich United White, plus The Saints FC. What is it that characterises us on and off the pitch? Who are we? Well, our loosely assembled players number about 80 heads and an equal number of capable pair of legs (for the most part, we'd like to think).

But all show with their very individual customs, religions and even approaches to the game, flocking in from many corners of this world, adding individualism to an already quite individualistic team approach. Zurich United shelters a film critic, actor, Mount Everest climber, chain smoker, speed metal drummer, cello player, restaurant enterpreneur, goverment litigator, teacher, undertaker, tv journalist, criminologist, cook, teetotaller, banker, student, dreamer, realist and a former guest of a strict state institution (with us, everybody gets unlimited second chances). Our baby player is 17, whereas our oldest pushes 60.

No, it's not like we're zero sportifs, where did you get that idea? In fact, Gilbert Gress might be honoured to  be our coach, because his motto fits us to a T: «A player must be able to stop a ball and then kick it. That's all I'm asking.»

In every game, we always play to all human limits because we don't want to shame the sport and its billions of followers. We always keep that in mind right at kick-off, adding, of course, to the already substantial pressure.

Our song is R.e.s.p.e.c.t.; we don't miss a chance to intone it and honor its originator, Ottis Redding. We also pay R.E.S.P.E.C.T. to our team mates, our opponents, the ref, even if he has a crooked whistle.

But what about the spectators? Honestly, they are too few to be honorably mentioned here. 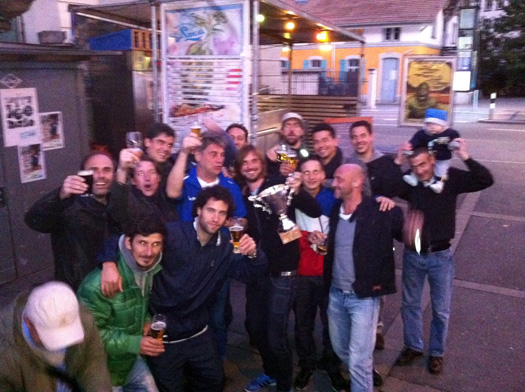 Coupe d'honneur (fsfv), Winners 2011, Kampeon
— Chapeau, chapeau. For Wanja. And all the other good guys up there.