﻿Food+DrinksConcertsFootballContactAbout us
live Lokal...
news...
ON THE MENU
Lunch served from September 20th to September 24th
R.E.S.P.E.C.T.
Our own house publication, providing an interesting look into what's what on our island and beyond...
Lokal LOV.
A special column giving a high-five to worthwhile articles and opinions all through the year...
Sihl water level
Natural Surround & Cinemascope

balmorheamusic.com
facebook
Tuesday, 01.10.2013, 20:20
oh what a night...
Balmorhea (USA)
Doesn't their name sound like the name for a fine single malt Scotch? But Balmoreha's a band and they offer a quite different kind of refined joy but from a quite unrefined part of the world.
They're a minimalist instrumental ensemble, primarily framing post-rock with classical influences. Balmorhea actually is a tiny town in the Western part of Texas where on the map it looks like the Lone Star state is pointing a finger towards the SWest. And that's perhaps why there is an apparent Southwestern feeling to their balsamic music, derived from and heavily influenced by just that frontier environment. You'll hear elements of the music of the Texan settlers living in those desolate parts and it's also sound that will bring up images of a raw and unforgiving landscape. Its stillness, remoteness and great natural beauty are all celebrated through their sophisticated art.
The band was formed in 2006 by multi-instrumentalists Rob Lowe and Michael Mueller and since then has organically expanded into a sextet. The instruments, beautifully played to provide the flying carpet for their multi-layered sound configurations are Violin, Piano, Cello, Guitar, Banjo, Contrabass and Percussion and it all comes together in a slow, ethereal and extremely beautiful union. Their music will drift by you like the untameable tumbleweed, it's magical, eery and pastoral but then and suddenly, it'll surprise with a sweeping, tornado-like attack.
It's their sixth tour of the U.S. and Europe and they've shared the stage with Tortoise, Fleet Foxes, Mono, Bear in Heaven, Sharon Van Etten,
Damien Jurado and Efterklang. Not surprisingly, they like Debussy and Beethoven, but also Rachel's and Gillian Welch and on to Max Richter, Arvo Paert and John Cage. Five beguiling albums were created, their latest is «Stranger» which came out in 2012 and it brings more earthier themes then the previous more extraterrestrial sounding work.
For all you tumbleweeds out there in need of a stop for the refreshment of body and soul, drift on in. The music of Balmorhea promises to be an very fine cosmic and earthly indulgence presented to you on illustrious ground. 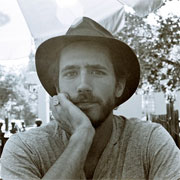 jbm-music.com
facebook
JBM
For openers, he recorded his debut «Not Even in July»(2010) in a church. Outside of it, he opened for A.A. Bondy, Other Lives, Damien Jurado and St. Vincent on their tours and it's appropriate and natural to compare him to Bon Iver. He's Jesse Briant Marchant or JBL and his newest album's titled «Stray Ashes» and we're looking forward to him blowing us an earful of it.
He was born in Montreal like the Dancing Rebbe Leonard Cohen (it's in the waters of the St. Laurent) but currently lives in New York. A singer and songwriter and multi-instrumentalist par excellence, his music is best described as a representation of a magical and spheric Nouvelle Chanson. Leonie Cooper wrote in NME that «JBM's electronically temperate Woodsman Folk is also sensually ghoulish - a bit like a soulful punch straight into your intestines.»
If you think you recovered sufficiently from that you're ready for more: His arrangements and sound are dark, dynamic and melodious while still remaining somewhat raw and vulnerable. He unites grace and intensity as if they were natural twins and that could be why Jessies's listed as Special Guest on the Fall 2013 Balmorhea Tour. We're looking forward to JBM's visit by the always melodious, dynamic and
dark(blue) Mississihl, our mother of all kinds of dark and dynamic spirits.
Back to Hall of Fame