﻿Food+DrinksConcertsFootballContactAbout us
live Lokal...
news...
ON THE MENU
Lunch served from December 14th to December 18th
R.E.S.P.E.C.T.
Our own house publication, providing an interesting look into what's what on our island and beyond...
Lokal LOV.
A special column giving a high-five to worthwhile articles and opinions all through the year...
Sihl water level
Lorem ipsum etc...

jamesyorkston.co.uk
facebook
Sunday, 17.11.2013, 20:20
oh what a night...
James Yorkston
+ Seamus Fogarty (SCO / IRE)
If someone told you they saw a seal in the Mississihl, you wouldn't believe it (at least not yet). But if we told you there's going to be a Scotsman and an Irishman on our stage together, believe it you can.
Besides coming from different Northern shores, both James Yorkston and Seamus Fogarty are products out of the legendary Fence Collective in Scotland, founded by King Creosote. Lo-Fi Folk, Deep Listening Psychedelic Folk. Sounding out of this world, yet with feets firmly planted in it.

James and his band The Athletes, have visited before. He's grown out of Punk, now his art is more fragile, his voice special and mysterious, his songs wrap themselves around the obvious, compare him only to Bonnie Prince Billie, opinionates Rolling Stone. He explores way deep and is searching like a deepsea diver and he has been adding pearl after pearl to a string of exceptional songs. He aims for the subconscious and his songs are intuitive, surreal and emotional. You can hear them on his latest cd "I Was A Cat From A Book". James Yorkston is truly one of the greats and not just in Scotland. 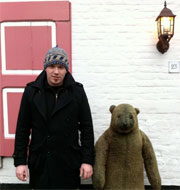 seamusfogarty.com
Facebook
The Irish singer/songwriter Seamus Fogerty is cut from a similar cloth. He writes forceful and insightful songs that are witty, like the one about «The mountain that steals t-shirts» or «The women that look like dinosaurs» and other assorted happy juxtapositions. Fittingly, his current solo work is called «God Damn You Mountain».

These two guys are buddies and together, they'll present an evening of captivating and wondrous musical storytelling. It's just another one of our eclectic bills that shows we're trying hard and bending over backwards for you. Hell, we'd even bark like a seal.
Back to Hall of Fame