﻿Food+DrinksConcertsFootballContactAbout us
live Lokal...
news...
ON THE MENU
Lunch served from September 20th to September 24th
R.E.S.P.E.C.T.
Our own house publication, providing an interesting look into what's what on our island and beyond...
Lokal LOV.
A special column giving a high-five to worthwhile articles and opinions all through the year...
Sihl water level
dark stories & mysterious emotions

blackyaya.com
facebook
Sunday, 15.09.2013, 20:20
oh what a night...
David Herman Dune
aka Black YaYa (FR)
Even with the new moniker Black Yaya, we immediately recognised our wonderfully crazy friend, the great David Ivar, frontman and songwriter of Herman Dune. It shouldn't come as a surprise that he wrote all the songs on his new disc. And because they were so radically different from anything he's penned before, he felt a new name would be appropriate also to totally express that uncompromising change in style.

More to the point, out came a dramatic album of a weird and sinister mood, accentuated with dark stories about revenge, manslaughter, murder and, apparently, plenty of death. Live, he performs the tales solo, sec, with no padding musical schnickschnack and hits it home with an unleashed guitar and a few sfx's here and there plus the ubiquitous harmonica. Hurling out of Black Yaya are deep anger and rage and deep-sitting grudges, blind fury and mysterious emotions, all performed with a sly and cunning craftiness.
Yes, for the most part what Black Yaya performs is like a merciless fight on a battlefield that's drenched in black, but despite of it all it can reach crescendos of total glorious release. It's an obscure and exciting work that'll reverberate from our walls and stir up the hidden pitch-black places of your soul. Solo death metal Black Yaya. Remember: You can't call the dead. But the dead will call you. 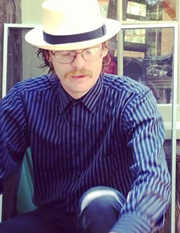 turnercody.com
Turner Cody
Born in 1980 in Boston as Turner Van Pelt Kniffin, we don't blame him one bit that he's now sailing under the name of Turner Cody. Implementing another auspicious change at the ripe age of 18, he flipped domiciles and joined the fertile anti-folk scene in New York.

Since then he's recorded material for no less than 8 albums, work that wasn't issued until 2007 on the compilation cd «60 Seasons». This was followed by the 2008 «First Light» and recording sessions in New York and Paris. Then came some heavy touring in Europe, with Adam Greene or opening gigs for Herman Dune and playing bass in that same group with which he's been collaborating since 2003. As a singer/songwriter he leans towards Woody Guthrie, Bob Dylan and Daniel Johnston and in 2002 he could be heard on Rough Trade's sampler «Antifolk Vol.1» together with likes of The Moldy Peaches, Jeffrey Lewis, Diane Cluck and others. Visually, Turner Cody can be seen on the Jeffrey Lewis' video «Williamsburg Will Oldham Horror».
And now you can experience Turner Cody live and in person on his next stop right by our island in the stream. Where on a dime, «Anti» can turn into «Pro» or the other way around - it's just a matter of how the night goes down.
Back to Hall of Fame