﻿Food+DrinksConcertsFootballContactAbout us
live Lokal...
news...
ON THE MENU
Lunch served from December 14th to December 18th
R.E.S.P.E.C.T.
Our own house publication, providing an interesting look into what's what on our island and beyond...
Lokal LOV.
A special column giving a high-five to worthwhile articles and opinions all through the year...
Sihl water level
le pop les filles

francoizbreut.be
Saturday, 24.11.2012, 20:20
oh what a night...
Françoiz Breut (F)
Handsome Hank, the horny heron is already flying circles over our island in giddy anticipation of this event. Our bird grew up on the Seine where he was in serious lust with Francoise Hardy, before he relocated to the Mississihl. Mon dieu, he'll probably show up, croaking «Voulez-vous coucher avec moi ce soir…»
Allons y, copines et copains, first, we present la belle Francoiz Breut who currently lives in Bruxelles (born 1969 in Cherbourg), is a personne grande since the beginnings of Nouvelle Chanson and illustrates children's books besides. «It's as if Morissey morphed into a French woman» chirped 'Die Zeit'. Bands like The Go-Betweens, Tindersticks, Calexico, Herman Dune, Portishead and The Walkabouts admired her first album «Françoiz Breut» (1997) and were fascinated by her brittle, ever-changing voice. The Walkabouts recorded a version of «Everyone Kisses A Stranger», Calexico covered «Ma Colere» and «Si Tu Disais» and Howe Gelb dedicated the song «Letter To Françoiz» to her.
She authors her songs mostly herself and «again enjoys singing like a bird». During a U.S. tour with Marianna Dissard it came to her how to go about her next album: «During the last concerts I was on stage with Stephane Daubersy and it seemed logical that we'd be working together on the new material. With the intention to fully allow spontaneity and the joy of simply playing. Little fragments served as inspiration for melody and rhythm and I would sing them for Francois and he would put them to the guitar. We went about it instinctively and  played together in the truest sense, not knowing where it all would lead us.» The result of this collaboration was the magical album «La chirurgie des sentiments», a fascinating, spicy bouillabaisse of chanson, indiepop and intricate sound experiments. Perhaps the best Breut to date. 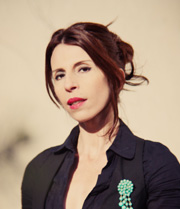 Whoever doesn't know Fredda, la belle Parisienne et chansonniere par excellence, cannot claim ignorance any longer after she's been with us on the island. Her new album «L'Ancolie» (Columbine) is the work of a great artist by the birth name of Frederique Dastrevigne. You'll be mesmerized following her lips form melancholic, well balanced chansons, as detailed and beautiful as la fleur du mal  is beautiful, wholly seductive and eerily bewitching. It's Nouvelle Chanson in its purest form, with references to Karen Dalton, Vashti Bunyan, Blues and Appalachian songs (no, not you, Geronimo). In insistent and typical gallic individualism, Fredda picks fine strings out of the air, pulls them to her and weaves it all into a web of contemporary gallic songs. It's the classic writers of the 19th Century and their poetry, like Gerard de Nerval and Guillaume Appolinaire, who in their art also referenced the flower in the title of her new album, columbine, that intrigued her into writing her songs. This blessed singer will be supported by the exceptional guitarist Mocke from the Parisian band Holden and by Marianne Dissard. «L'Ancolie» is a hot, indulgent confession of amour fou  for those moments in life that couldn't be more seductive - or more French. Stuff that's so truly beautiful, it should be forbidden.

To make this night a true affaire française, and after a 2-year absence, we present Le Pop DJ-Team, and their new edition of «Le Pop 7», a compilation of hot songs and dance tunes fresh from the Nouvelle Scene Française. It already sold over 80'000 copies and that alone should convince you to join their list of indiscriminating fanatiques. This current and fertile scene is already expanding into German speaking lands and it was successfully launched also by live appearances of Dominique A, Françoiz Breut, Marianne Dissard and Mathieu Boogaerts. Needless to say, it convinced some major labels to jump onto this fast moving «Le Pop» train with artists like Keren Ann, Coralie Clement, Mickey 3D, Camille and Benjamin Biolay.
Le Pop DJ-Team will bring you this mix of francophone sounds, made even more danceable by including Swing, Ska, Latin Beats and Sixties Ye-Ye, straight to our isle ultimative.
Bien, copines et copains, indulge yourself in a sensual tete-a-tete in this soiree française of seductive songs and hotass dance tunes.
Et en masse, s'il-vous-plait.