﻿Food+DrinksConcertsFootballContactAbout us
live Lokal...
news...
ON THE MENU
Lunch served from December 14th to December 18th
R.E.S.P.E.C.T.
Our own house publication, providing an interesting look into what's what on our island and beyond...
Lokal LOV.
A special column giving a high-five to worthwhile articles and opinions all through the year...
Sihl water level
It's Island Time, sailors and explorers!

Pop for people who hate pop: Arab Strap is dead - long live Malclom Middleton. And once again, he threatens that his latest album is his last... The current last is «Human Don't Be Angry» and it's a towering monument to Malcolm's very much underestimated art of playing the guitar. And then some.
«HDBA is a front that allows me to have fun again with my music. I had to go back to what gave me joy - which happens to be playing the guitar and writing music.» The name HDBA relates to the German TV show «Mensch aergere dich nicht», here called «Eile mit Weile» and in the UK «Frustration.» What's more, Malcolm's homepage shows a colorful hand-painted image of a face with lips drawn down to a «20after-eight» type of solemn expression and handwritten underneath is «My Life is dead». Ok, if he says so...but we're sure that couldn't be said about his current last cd, which for starters was supposed to be a purely instrumental endeavor: «Drum-free ambiently atmospheric». But when producer and drum programmer Paul Savage showed up at the studio, things started heating up and lyrics and drum songs were added. And then buddy Aidan Moffat from Arab Strap came in with some of his live drumming, out came «an album that I wanted to listen to rather than the album I wanted to make» says Malcolm. (Seems to us, that's the only criteria there is.) «It's only recently I realized how the record is also influenced by my childhood and the 1980's. Song titles like 'The Missing Plutonium', 'After the Pleasuredome' and '1985' pay tribute to Back to The Future, Frankie Goes to Hollywood and Live Aid. And obviously, Jan Hammer and Iron Maiden are in there too...» «Sublime songwriter pop» is what Rolling Stone called his last album «Waxing Gibbous». You know the one that came out before before the current last one, the one that sounded quite a bit like Arab Strap.
It's Island Time, sailors and explorers! Because if you miss this touching, beautifully sad, string- and chorus supported indie-pop that features ballads and guitar rock and is performed by this sublime and great artist of pop music today, you'll be an angry human later on. And your mental future could be as dead as a Mississihl fish in the warm water of summer. 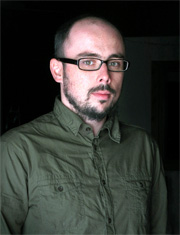 Facebook
Martin John Henry
As the mastermind, frontman and songwriter for the indie legend De Rosa, Martin John Henry has two classics from the Scottish scene on his palmares:  The two absolute masterpieces «Mend» and Prevention». And if that  wasn't enough, his new solo effort «The Other Half Of Everything» shoots light years ahead of even those pieces, way ahead into musical future.
Together with author Michael Farber, he created the collection «Ballads of The Book» which was initiated by Idlewild singer Roddy Womble.
On it, 18 Scottish indie heroes put original texts to individual sounds. And it's this real and imagined Scotland that's the focal point of MJH's afore mentioned solo effort. It's about here and now and everywhere also. Its about where you live. It's about your own little story and place in the large universe, strongly performed by Martin's in his unobtrusive style and manner. In 11 wonderful, short pieces a colorful sonic rainbow is presented by this sotto voce singer and it spans from acoustic folk pop and orchestral indie rock to elegant and danceable pop electronica.  An effort, by the way, perfectly produced and brought to life by Andy Miller (Mogwai, Scout Niblett). It's an all engulfing, many faceted soundscape, offering as many different sonic visions as the picture on the CD cover: Green, raw, swampy, hilly, edgy, dreamy and original. Be sure, what you see in the pix is just a prelude to what you'll hear on the isle.
We'll see you on our own swampy, edgy, dreamy and original island. Because, as every performing artist knows, the other half of everything that should not be missing, is you.
Back to Hall of Fame